At the final stage of construction of the logistics centre, during the thawing of the spring soil, part of the column foundations (21 pieces) were subjected to uneven sbsidence. Geological surveys carried out during the construction phase did not reveal waterlogged or swampy ground under part of the building. Surveys were carried out in winter, on the frozen base, which caused inaccurate determination of the physical and mechanical characteristics of the soil.

Before starting the work on strengthening the foundation, a set of geodesic surveys was conducted to accurately determine the position of the columns in space (in the vertical and horizontal planes), as well as to identify the loosened ground horizons of the foundation by dynamic penetrometer test. 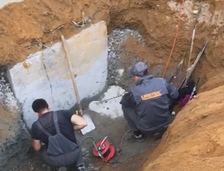