Focus
Strengthening the basis for the perception of increased loads

Impoving the ground to achieve the required strength and deformative properties of the soil in the base under the supports in the building without dismantling existing structures and machinary.

The project for the modernization of the production shop provided for the construction of a mezzanine, the supports for which were to be installed on the existing reinforced concrete floor. However, the relevant research and calculations have shown that the load-bearing capacity of the foundation under the floor structure is not enough to perceive the loads from the erected supports, so the project organization proposed to arrange additional foundations for them. For this purpose, it was necessary to cut openings in the floor for foundations under the mezzanine racks, which did not satisfy the customer.

Fixing of soil under the floors in the places of installation of racks for the mezzanine with the achievement of the required strength and deformative properties of the base in local hardened zones, ensuring the ability to perceive the loads transmitted by the supports.

To carry out the task the DEEP Lifting method according to the GeoResin technology was applied. GeoResin polymer composition was injected in the soil at local areas under floors in places of installation of the supports for the mezzanine. Such a mixture during rapid hardening, due to its expansion and the pressure created at the same time, compresses the soil with an improvement in its physical and mechanical characteristics under the floor, providing it with the ability to perceive the pressing loads transmitted by the supports of the mezzanine. In total, 18 injection points were completed with the injection into the ground at different levels directly under the structure of the existing floor through small-diameter holes drilled in it at the places where the projected racks of the mezzanine are installed.

The effectiveness of strengthening the base was confirmed by laser monitoring during injection by the fact of vertical lifting of the floor and the structures of racks mounted on it by an average of 0.5 mm and by dynamic penetrometer test of the soil before and after injection of the polymer composition, which revealed an improvement in the mechanical parameters of the soil up to four times. The work lasted 2 working days. 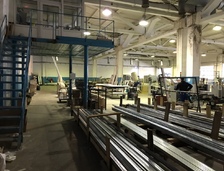 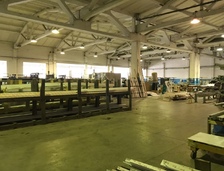