Lifting and re-leveling of planar structures

Focus
Re-leveling of the sunken area

Perform repairs at maximum speed and without stopping traffic on a defective section of the runway at the national airport.

At the National Airport, a defect appeared on one of the runway slabs in the form of a subsided part and a longitudinal crack. The difference between the surface marks of this slab and the neighboring ones was from 14 to 17 mm, which created inconveniences for the movement of aircraft at an optimal speed. The preliminary penetrometer test of the soil performed at this site revealed its local decompression under the subsided slab in the area of the crack that occurred. In this regard, to ensure the necessary bearing capacity of the base and re-level the surface of the defective part with adjacent ones, it was necessary to seal the soil with filling the gap under the plate by injecting a GeoResin polymer.

Ensuring the continuous operation of the airport runway by performing repair work on the defective section in an operational mode.

To solve this problem, GeoResin Floor Lifting technology was used, which involves pumping a special expanding composition directly under the runway slab through small-diameter holes drilled in it. The expanding geopolymer between the ground and the plate, with an increase in its volume, created the necessary lifting force to lift the runway plate and, due to penetration into the gap under the slab construction, ensured its filling and compaction of the underlying soil with sealing of micro-damage.

Using the GeoResin method, the problem was solved in the shortest possible time without stopping the aircraft traffic. 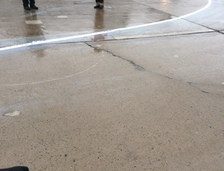 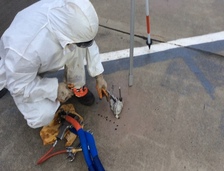 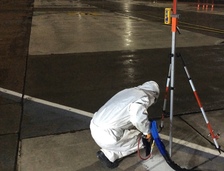 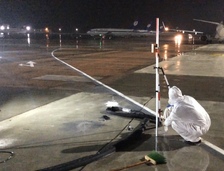